War dogs is a comedy-action drama based on a true story about two Americans who try to make money using the wars and conflicts across the world. One phrase is used often – ‘between the lines’ which implies wars here obviously. 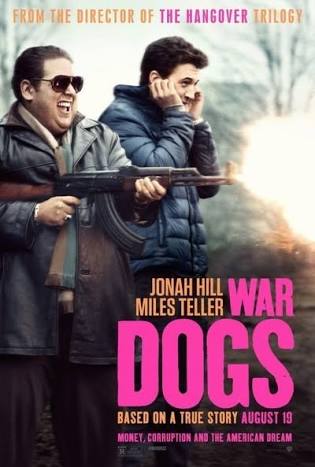 Two masked men pull out David ( Miles Teller – Divergent, Whiplash) from the trunk of the car and are about to blow his brains out.

Then the narrative style story starts where David gives us some interesting facts about war and what sort of money is made using conflicts and scams ( did you know that $17000 is used to equip and arm one US soldier ). It really disgusts how they made money using Iraq and Afghanistan.

A few years before David ends up in the trunk, he has a mediocre life. He is a certified massage therapist who hates his job and he sees he’s going nowhere. At a funeral he meets his school buddy Efraim ( Jonah Hill – The Wolf of Wall Street, 21 Jump Street) who is a arms dealer for the US army. He deals with ‘crumbs’ as he states – the small orders that involves only few grands. It is convenient enough for David to nod his head after he knows what Efraim makes through this business.

So the duo cracks on closing in smaller deals and make a good amount of money. They even survive a drive through Baghdad during the war. Efraim is the gutsy but morally compromised businessman who can even go to the extent of fooling the mighty Pentagon. He’s the sort of guy who has a big poster of  ‘Scarface’ in his condo.

Then the inevitable happens – they get greedy and foray into something that’s way out of their league. David ends up in the trunk in the middle of nowhere. It’s a ride downhill from there with ‘karma gets back at you’ climax.

There’s a little humor and it’s laced all over the movie.  Jonah Hill is cast in such roles. Here too he’s the go-getter Efraim. And Miles Teller just fits in the ‘right guy for the wrong job’ role. And there’s Bradley Cooper playing the shady arms dealer. It’s an okay-kinda movie. I would rate it 6.5 on a scale of 10. You can get an idea on how even novices could deal weapons, ammunitions in the US. No negatives here. The movie is right on it’s track on what it wants to convey and where it needs to tickle. The ‘Hangover’ trilogy was into absolute humor and craziness but this one makes sense at times.

I tried hard not to go personal in a movie review. But…

It appears that the US has a lot of con artists, small time scammers and all sorts of such noble men who make a joke out of their government itself. But what the government is doing outside their borders is simply ugly and selfish.

The movie for Day 3 is gonna be interesting for sure.😉

The Alchemist is not in seclusion anymore..Earthly commitments that kept him occupied have vanished and here I am ... Creating blends with thoughts. ;)